keeping others in mind

Bernie Senior Beta Services
Red Cross Blood Drive
On October 2, 2017 we hosted a Red Cross blood drive. Students were able to donate from 12-3 p.m. and it was opened to the public from 3-6 p.m. We were able to raise 61 units of blood for the Red Cross organization!
Hurricane Harvey Relief
After the tragic Hurricane Harvey hit and devastated thousands, the Bernie Senior Beta Club decided to hold a clothing and food drive to send to those that were affected by the storm. Some members also volunteered at local collection places that were gathering items for the victims. 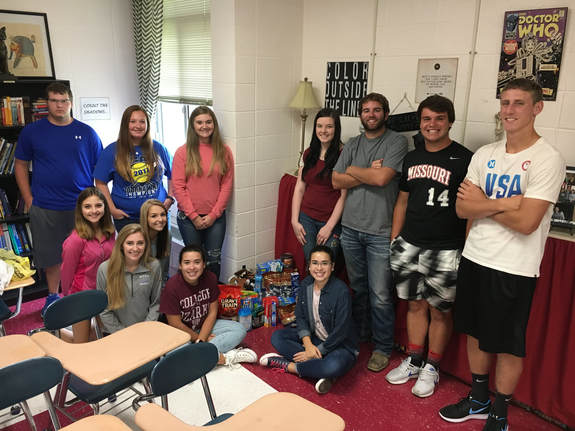 7th Grade Orientation Leaders
On May 23, 2017 at 7 p.m. sixth grade students and their parents made a visit to the junior high building for a brief orientation.  Administration talked to the entire group about schedules, policies, and expectations of junior high students.  Beta members volunteered to be leaders of small groups to give the upcoming junior high students a tour, introduce the students to teachers, show them how to open lockers, and answer any questions they may have about junior high.
﻿
Cemetery Clean Up
On March 13, 2017, Bernie Senior Betas volunteered on a chilly day to help clean up the Bernie Cemetery. Betas picked up trash, old flags, and old flowers throughout the cemetery.
Adopt a Family
The Bernie Beta Club is adopting another family this Christmas!  The Bernie Beta Club Adopt a Family Committee will be going shopping for clothing, toys, shoes, coats, and household items this December. We will gather all the cans of food from our can food drive to make a nice Christmas meal to go with their presents. The Bernie Beta Club is excited to help another family this Christmas season! Check in during December to see the pictures!
National Senior Beta Website
Missouri Beta Club Website
Home
Created by Daisy Eaton
Bernie Senior Beta Club
Last Edited:  10/30/2017